Problems and successes in the field 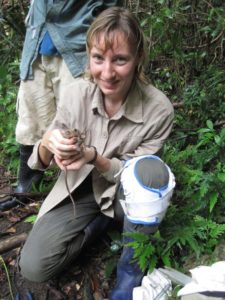 Quite a long time passed since I informed you about the lastest news from the field. I took a break and returned home for one month at the end of March. Two volunteers took care of the project and its smooth running during that time. They worked consciously and monitored all three animals that were radio-collared so far…

However, this time was not without problems. Shortly after I left, sudden cutting of trees in the locality of the study disturbed our tarsiers. They were forced to move from their usual sleeping places and also change the nightly movements. Fortunately, the cutting decreased soon and our animals return to their previous places. Shortly after, we faced a sabotage of our marked points in the field. In order to monitor the animals using radio-telemetry we marked several points in the forest. We measured exact location of these points using GPS and measuring tape and use them for locating of the tarsiers. At the beginning of April someone started to intentionally destroy and cut our markings. Most of the points that are used so far were renewed and we hope that they will last until the end of our study.

After one moth break I was on my way back to the Philippines when I got an important message. My volunteer told me that the batteries in all three radio-collars were about to finish. It was a big surprise because we expected them to last 4-6 months, not only two. The signal was so weak that we were hardly able to locate animals on their sleeping sites when I returned. We did not have time to wait. After Barbara found one female tarsier on a sleeping site we called local hunters that helps us with catching. We recaptured the female, exchange the radio-collar and released her on the same place. Unfortunately it was too late to go for another animal and we had to wait until another morning. Again, with help of hunters, we focused on male tarsier. As the signal was really weak we had a hard time to locate and catch him. About one hour later we found a signal coming from a hole in a rock. Tarsiers often jump into holes when they try to hide. The hunter caught one tarsier but we realised that it has no collar. It was weird because we got a signal coming from a hole. We looked once more carefully to the hole and found one more tarsier hiding there. This time it was our male, the previous one was newly caught female.

This was a real success. Philippine tarsiers are regarded as one of the most solitary tarsier species and so far no one reported two tarsiers being so close, especially with the fact that breeding season (and not mating season) is starting. We radio-collared both animals and we will monitor them further. If you want to support us, adopt a tarsier!