Captive tarsiers released into the wild 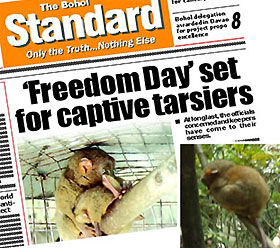 Recently we informed you that the Philippine tarsiers kept as a tourist attraction hope for a better future.

After the meeting focused on the captive tarsiers issue in December 2010, the first results occurred. At the beginning of this year DENR (Department for Environment and Natural Resources) stopped issuing of the permits for new tarsier holders. This ban has been valid since 2008 but was not implemented and new facilities have been established. It has stopped now.

35 captive tarsiers kept in inappropriate conditions were released by local politicians and DENR personnel on 22nd July 2011 into the wild in Loboc area. We do not know if there were detailed preparations prior the release and if the animals will be monitored. But this act will for sure help to reduce abusing of tarsiers and the illegal trade and poaching.

The tourist spot operators and the stuff-toy makers protest against this act. Let’s hope that the interest in tarsiers and their future will be more important then the commercial interests.